We are neither historians nor experimental archaeologists, our work doesn't have a scientific vocation, but that doesn't prevent us from following with interest the studies, the conclusions of excavations, the work of historians, in order to be able to offer an open window to the past, as faithful as possible.

Living History is about going beyond the simple restitution of a costume, but it is also trying to bring to life the man who wore it at the time in question. It is trying to understand it, to make it understood, to tame its doubts, its beliefs, its struggles, its desires, its needs.

It's to enter into the psychology of an era, of a society very far from our contemporary habits. It's trying to put down our reflexes dictated by a society marked by Christianity in order to better understand the place of religion in the Roman world. It's to forget the modern tools to try to reproduce the gesture of the men of Antiquity.
The goal of historical reconstruction, of Living History, is therefore first and foremost a goal of mediation: for us, the immersive pedagogy that we use allows a more effective transmission of knowledge, because it's visual, impactful for the public, just like for those who practice it.

We therefore strive to embody a character of legionary, merchant, so that when you come to our camp, you have the impression of actually meeting an actor of the Gallic Wars or the beginning of the 2nd Century.

Finally, we aren't here with a sacred mission, a historical evangelism or a national novel to draw up. Humbly, our role is to try to be as faithful as possible to the portraits drawn up by the works of the many historians who have studied our periods.

What is Reenactement for us? 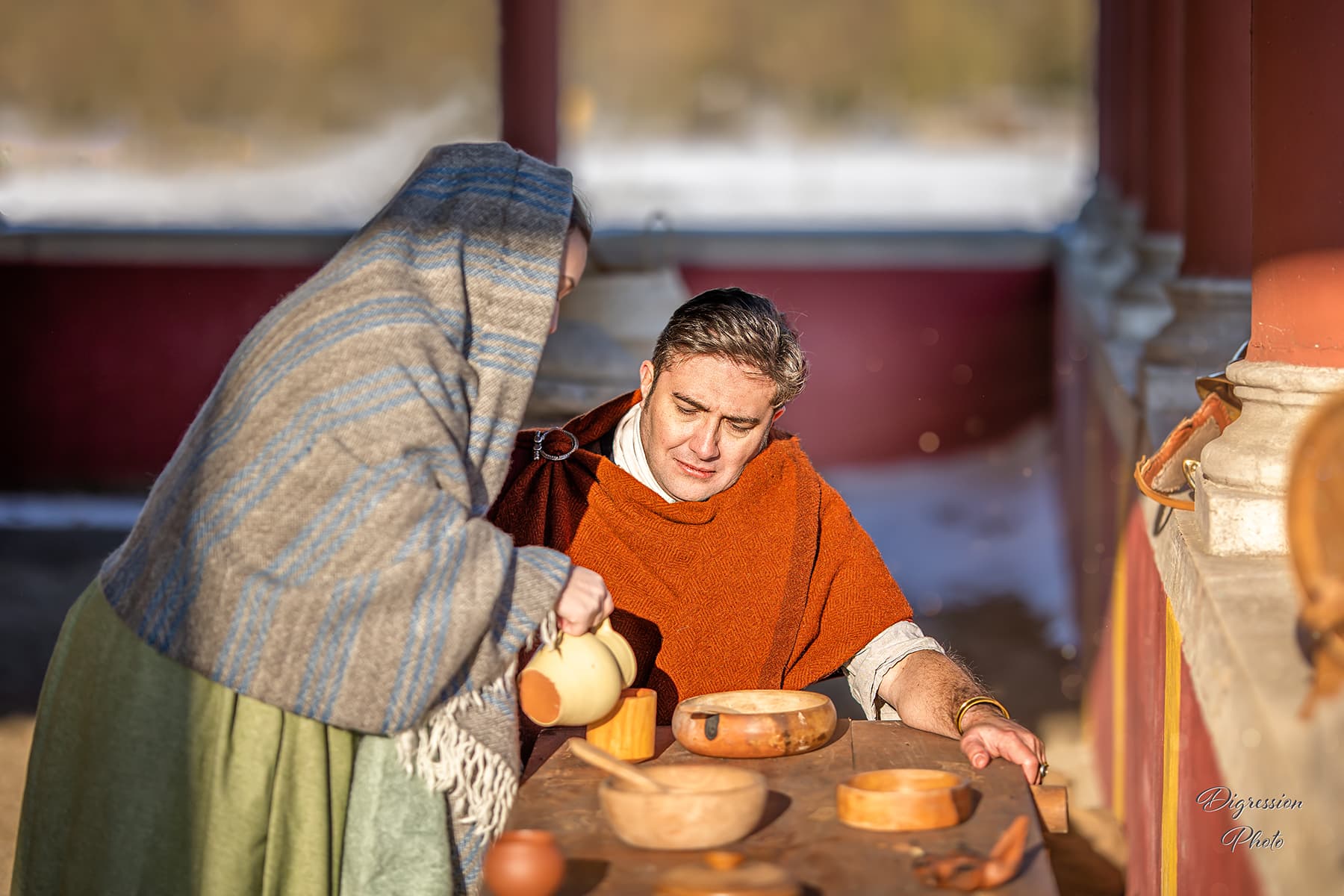 Our project is to offer a reconstruction of every moment, both in front of the public and outside. Thus, our legionaries as our civilians sleep in the camp, make their food on the spot with the products existing at the time, wash themselves with a tub of water and strygiles, heat themselves in front of the wood fire in the evening.

The night will be spent in the tents of the camp, bundled up in woolen blankets and on a bed of straw and sheepskins, with the oil lamps suspended under the canvases as a source of light and heat.

The very rhythm of the days in camp is set to be as faithful as possible to what we know to be a legionnaire's day, marked by guards, training, chores and moments of rest.
Likewise, the internal economy of the camp is intended to be as authentic as possible. Each legionnaire will receive his pay in the morning, after the call and the inspection, which consists of a few sesterces for the youngest recruits. In addition to that, the legion provides wheat and salt to each contubernium, a tent made up of 8 legionaries, to be able to prepare to eat pancakes in particular.

For the rest, the legionaries will have to spend their balance with the civilian merchants who accompany the army on the march, in order to improve their living conditions.
This balance can just as easily be spent at the tavern which is in the civilian cabanae, or after different merchants to improve everyday outfits.